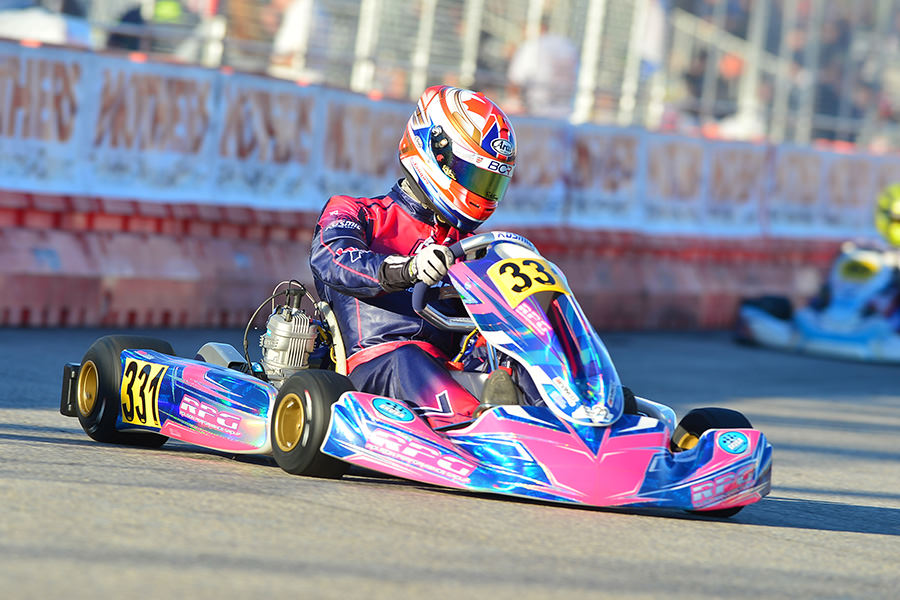 Canadian Ben Cooper drove to victory for Rolison Performance Group in the X30 Senior division for his second career win at the SuperNationals (Photo: On Track Promotions – otp.ca)

Experience, knowledge and effort were leveraged in full effect under the Rolison Performance Group (RPG) tent during the 22nd running of the Superkarts! USA SuperNationals, which was held on the November 14-18 weekend at the Rio All-Suites Hotel and Casino in Las Vegas. The team brought together 27 talented drivers from all over the world and turned their best overall performance ever, qualifying 20 drivers into the SuperSunday main events which included four podiums finishes and a huge win in the headline X30 Senior category with Canadian Ben Cooper. Cedric Lupien joined Cooper on the X30 Senior podium, while Noah Milell finished a strong fourth in KZ. Jason Burns was the runner-up in the X30 Master final on SuperSunday, putting on a show in his first SuperNationals adventure. Utilizing the immensely-tunable Kosmic chassis, the team’s success in Las Vegas bodes very well for RPG’s planned attacks on the 2019 SKUSA Winter Series, Florida Winter Tour, SKUSA Pro Tour, California Pro Kart Challenge, and CAN-AM Karting Challenge / IKF Northwest Region, all leading to SuperNationals 23 next November.

Despite the tremendous pressure associated with the five-day event, the atmosphere under RPG’s awning remained calm and focused thanks to the team’s experienced staff of coaches, mechanics and data acquisition experts. The positive camaraderie between drivers from all corners of the world was overwhelming and this team approach paved the way for successful outings from all corners to the team’s compound at the Rio. RPG’s in-house engine builder Alex Vincent has helped raise the team’s game, as well. Alex Vincent Performance (AVP) motors are supplied to all of the team’s clients under the tent and these engines are available to RPG customers only. In their quest to provide the best program possible, Rolison Performance Group is always searching for the necessary edge. 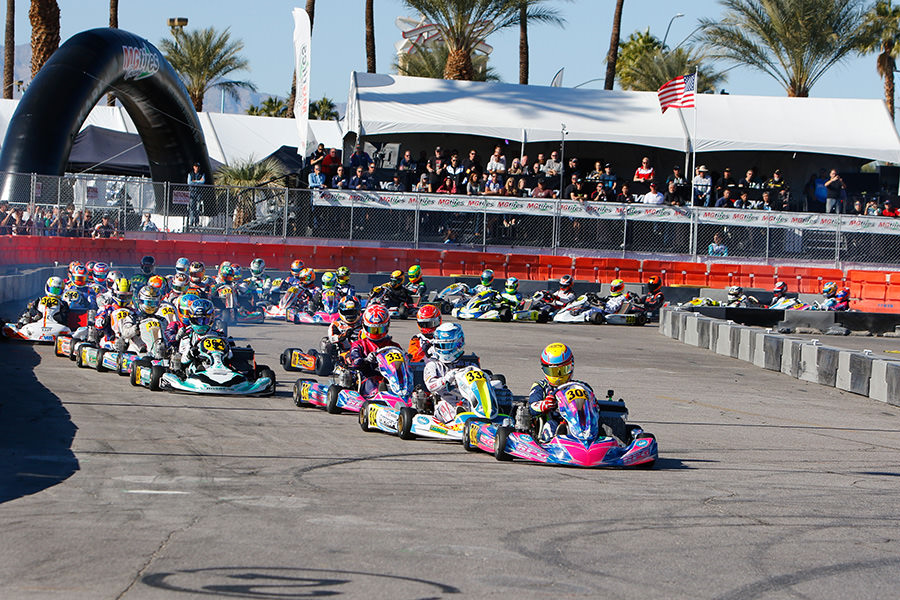 RPG driver Cedrik Lupien led the X30 Senior field to the green flag, coming away with a podium result on SuperSunday (Photo: On Track Promotions – otp.ca)

“I’m not sure that I could have written a better storyline for this year’s SuperNationals,” offered Rolison Performance Group team owner Mike Rolison. “To qualify all eight of our X30 Senior drivers into the main event was incredible, and to post the X30 Senior pole, three heat wins and the victory is astonishing. I’m so proud of our team, from all the drivers to my hard-working staff. Everyone worked together well and they worked their tails off to give everyone a chance to meet their own goals and expectations for the event. This race requires so much planning and preparation, and it’s incredibly satisfying to achieve the level of results that we did!”

RPG drivers were frontrunners in the X30 Senior class, with Canadian Cedric Lupien taking the pole.  Cedric’s brother Samuel Lupien was also in the fight through the heat races, as was Cooper. Cedric was second in the opening heat race and then won the next two stints to earn the pole for the final. The Lupiens finished 1-2 in the final heat, with Cooper in third to sweep the top-three. In addition, Jacob Gulick bounced back from a 24th in his opening heat to finished sixth in Heat 2 before winning his final heat to qualify straight into the final without needing the Last Chance Qualifier. In total, racing against a total field of 87 other drivers, RPG qualified all eight of their X30 Senior drivers into the SuperSunday main event, which was a truly impressive feat considering the depth and quality of the field. 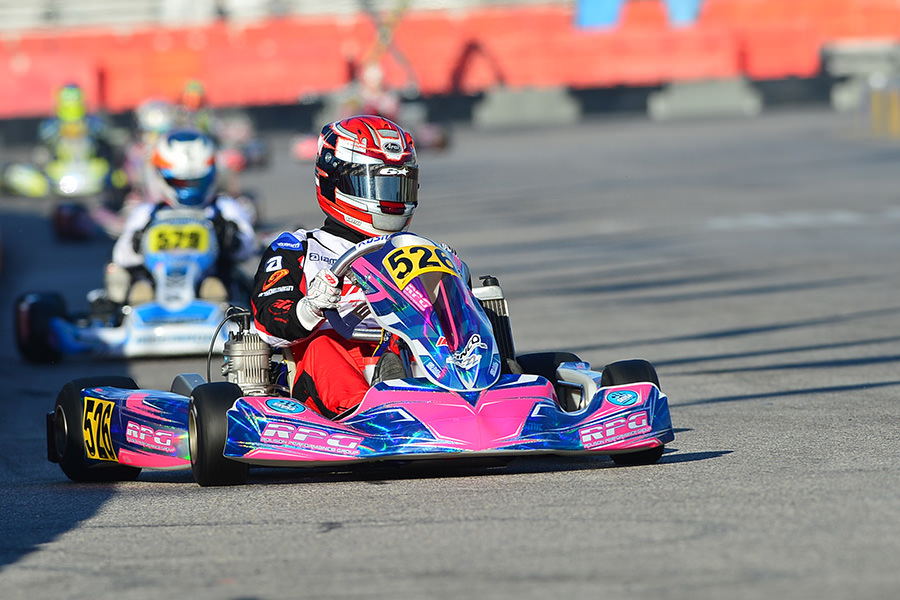 An impressive debut at the SuperNationals for Jason Burns, giving the RPG team a podium in the X30 Master division (Photo: On Track Promotions – otp.ca)

The battle for the win in the X30 Senior final was one for the ages, and after contact between the two leaders on the final lap, Cooper slipped through to take the prestigious victory. Cedric Lupien finished third to put two RPG drivers on the podium. Samuel Lupien ran up front all race but was run into the wall on the final circuit and classified 32nd in the final tally, while Gulick finished 30th. Australia’s Reece Cohen was 17th, Switzerland’s Miklas Born was 19th and American Hannah Greenemeier took 36th after fighting her way into SuperSunday via the LCQ. Mexico’s Rafael Villagomez was 40th.

In X30 Master, American veteran Billy Cleavelin and Singapore’s Jason Burns led the way for the team all weekend. Cleavelin was making his first IAME X30 start and he showed the younger drivers of the class his speed and experience, running within the top-five all weekend long. The Californian qualified third, ran in the top-five in all three heats and battled in the main event to an impressive fourth before a pushback bumper penalty dropped him off the podium to 13th. Burns qualified fourth and won his final heat to secure the outside of the second row for the main event start after top-10 finishes in the first two heats. Burns set the fast lap in the final as he hounded Kip Foster for the win, taking second by just 0.184 seconds after 20 hard-fought laps. 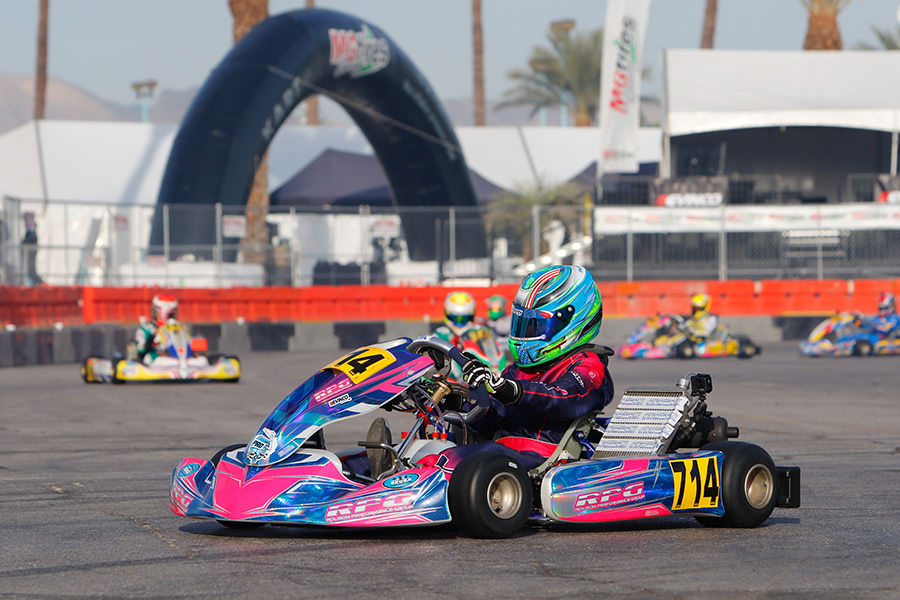 Josh Pierson landed inside the top-15 of X30 Junior to lead the younger continent of RPG (Photo: On Track Promotions – otp.ca)

In the gearbox categories, RPG fielded the effort for Noah Milell and he was in the fight for the KZ race win from qualifying onward, timing in second. In the heat races, the Swede began with an impressive win and then followed up with third and fourth-place finishes. After running second through the first half of the 25-lap final, Noah slipped to fourth at the checkered flag to make his first trip to the SuperNationals podium. Oregon’s Cam Egger raced alongside Canadian Dan Monteiro in Pro Shifter, and Egger finished in the front half of the order with a strong 14th place result on SuperSunday. Competing in his 22nd SuperNationals, Bonnier Moulton finished 22nd in Master Shifter.

The X30 Senior, Junior and Master classes, in addition to Mini Swift, drew enough drivers to run split heat races and Last Chance qualifiers to complete the grids of 40 drivers. Josh Pierson continues his rapid rise and finished an impressive 14th in his first SuperNationals in the X30 Junior class. Branyon Tiner, Caleb Schrader and Pedro Aizza made their first SuperNationals starts and performed well in X30 Junior, battling against an immensely deep line-up. Tiner had great speed all weekend and qualified 20th and then raced his way to a 14th place main event start on the strength of a pair of top-10 heat race results. An on-track incident dropped the young American to 28th in the final results. Aizza posted a pair of top-15 finishes in the heats, adding in a 24th in Heat 2, to nab the final direct transfer through to SuperSunday. Starting 34th in the final, the Brazilian went on to finish 29th. Schrader qualified 67th out of 77 drivers and then used the heats to advance a total of 26 positions.  Caleb started the LCQ in 19th and would fight all race to move forward, finishing 22nd in the final tally. In the Micro Swift category, Graham Trammell arrived in Las Vegas after finishing fifth overall on the SKUSA Pro Tour. Trammell qualified 27th in the 40-kart field in his first-ever SuperNationals and eventually advanced to finish 25th on SuperSunday.

Rolison Performance Group (RPG) is national-level karting team based out of Wilsonville, Oregon. RPG competes nationally at the Superkarts! USA Pro Tour, in addition to the SKUSA Winter Series, Florida Winter Tour, California ProKart Challenge and the new IKF Northwest Region. For more information about driver programs, contact Mike Rolison at 503-260-4514 or visit RolisonPerformanceGroup.com and follow their success on Facebook, Twitter and Instagram.